It’s not often I get the chance to review a book from another children’s author, but today is one of those days!  Authors Brian Jeffs and- Nathan Nephew, co-hosts of  “At Odds: A Political Talkshow” have written a book that goes in depth about reasons to open carry, philosophies thereof, and some pretty decent explanations of the Second Amendment.

While the Prepper Pete series I write for sometimes is critiqued for being targeted at “too young” of an audience, “My Parents Open Carry” goes in the other direction.  This isn’t a five minute bedtime story.  However, it is very in depth and explains several of the most popular discussions surround open carry, concealed carry, and the Second Amendment.

I’d be lying if I didn’t admit to learning a couple of things, despite the fact that I often put forth similar reasons to people about the subject at hand.  For instance, there is a clear definition regarding the difference between the “organized militia” and the “unorganized militia” – direct from U.S. Code, but something I’ve not really heard of late in the discussion.  Who knew!?

There are discussions at the bookstore, the grocery store, and on the range, etc.  Each one poses a different philosophy.  One of the simplest messages, however, is that responsible folks take their safety and the safety of their loved ones seriously, and “When seconds count, the police are minutes away.”

It’s really hard to argue with that logic!  Grab you your own copy on Amazon today!

“Could you use a little help introducing your children or grandchildren to prepping?

It’s Prepper Pete to the rescue!

Who Is Prepper Pete, Anyway?

Prepper Pete is the creation of Kermit Jones, Jr., who has written fun and colorful books aimed at introducing young children to preparedness. As the book cover shows, Prepper Pete is an ant. You remember the little story about the ant and the grasshopper and how the ant was busy preparing to survive winter. Then there are Scripture verses from Proverbs chapter 6 urging us to look to the ant as a positive example.

So who is Kermit Jones, Jr.?

He was my guest on this week’s DestinySurvival Radio. I’ll let him tell you more in his own words from bio info he gave me.

I was surprised during our conversation to find he came to preparedness through a different route than his military background. It so happens that his life’s experiences have provided stepping stones for prepping.

Check out the blog post and the 50 minute interview! 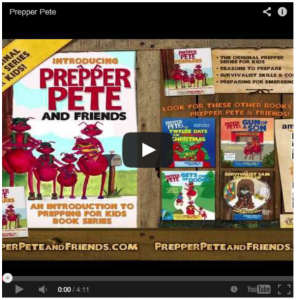 I recently got the opportunity to review a very interesting book from Kermit Jones Jr.

This military Chaplain and father of 4 young children needed to figure out how to introduce the concept of personal preparedness to his daughters without scaring.

In this book Kermit uses the old prepper analogy of prepared ants to explore the concepts of prepping through the life of one particularly smart  ant named Pete.
In Pete’s travels he and his family decide they need to prepare and in a simplistic and non-judgmental way they store food, learn skills, and prepare for a variety of unknown and known disasters.

“The clever illustrations and gentle words helps bring the idea of preparedness to a child without causing strife to those who are unfamiliar with the concept, and encouragement for those who are already preparedness-minded. There’s nothing like a child’s book to give us that “A-HA! We do that, too!” for those kids who are already preppers at heart.”

Continue to the original review…

Thanks to Prepper Days for a great review and recommendation!

“Kermit helps children understand the importance of making sure that they and their families have back up plans just in case there is ever a natural disaster or other problem. As someone who has children in their prepping community, I think this book is a great tool to help the younger children relate to and make them feel that they too can play a role in their families survival. As a learning tool this book opens up dialog that can engage children and help them use creative thinking to see what they can think of in order to help keep their family safe, and opens up being able to talk to their children about gun safety and proper handling. The book talks about keeping the family safe from bad guys, which allows parents to establish who the children can and can not trust. I believe Prepper Pete & Friends will make a great impact on the prepping community and that every family should own a copy or two of these great books.

“The books are well written and beautifully illustrated… presents a concise argument for the reasons to prep and follows that up with simple, concrete steps to become better prepared… Bottom line, I liked the book but think it’s content… would serve as a nice introduction to preparedness… I can think of a few adults I should share this with as well.”
– Andrew Jackson of Prepography.com

Another great review, though the writer is clear on his concerns with age appropriateness and maturity levels of the kids. He is clear that he thinks the topic is for older children (12+), although he recognizes it depends on both the parent and the child.

Want to see more reviews? Check them out here!

Came across a review this week, and a news release that made the paper:

The Southside Messenger is a fabulous hometown paper from where I grew up.  They were awesome enough to post a news release!

A review I’ve editorially shortened a bit by DiabloLoco at The Mental Militia:

First, the kids (aka, the minions): They thought that the illustrations were very nice. They liked how the ants looked. They also thought that the story was cool. The only thing that they didn’t like was how I would stop at certain points of the story to compare Prepper Pete and his household, to our own, or when I would explain something in deeper detail. eg; solar flares, economic collapse….etc….etc….
Second, the adult (aka, DiabloLoco): There is an interesting comparison between ants and humans when you really think about it. The story was very good. It touched a lot of bases and did very well at explaining the reasoning for prepping and the virtues of being prepared. My favorite part of the book was the importance of secrecy (OPSEC) about the family’s preps. That was very important to me and mine. I am constantly trying to drive that point home to the minions. Reading the book to the minions was a WONDERFUL opportunity for me to speak candidly with them about why our family preps, bug-out plans, our BOL, gun safety, fishing and hunting, and gardening too! We must have talked for a good 45 minutes after the book was finished. THAT, my friend, was the most wonderful thing of all. I recommend this book for any prepper with a child (or children) that are between the ages of 3 and 9.

See other books in the series and grab a copy of your favorite one today!
Loading Comments...