We’re excited to announce that Prepper Pete and Friends will soon be releasing a coloring book to help engage kids with learning about the importance of being prepared!

Our first book will be focused on coloring pages, featuring characters from our existing books, as well as our upcoming “Be Prepared: A Be Ready Book for Kids” (scheduled to be released later this year!).

The second book will include coloring and fun activities that are designed to teach and entertain.  We’ve got quite a few fun ideas we think kids will absolutely love! 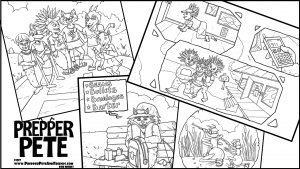 We’re also looking to hear from you! What are some fun ideas you may have (or that you’ve seen) in coloring and activities books that could help Prepper Pete teach kids about the importance of being prepared?  If you give us something we haven’t already thought of and we use it… you’ll get a free copy of the book when it ships!

A fabulous discussion on “Doctor Prepper’s Critical Preparedness Radio (CPR) Talk Show”  James Talmage Stevens, aka, “Dr. Prepper” is author of the #1 best-selling “Making the Best of Basics” and has sold more than 800,000 copies!

Targeted at ordinary people, his weekly broadcast – CPR – could save a life!  My segment starts right at 34 minutes and goes for about an hour.  I think one of my favorite discussion points was surrounding ourselves, not necessarily “like-minded” people, but rather “like-spirited.”  We also discussed self-sufficiency vs. community building, and the idea of not having to go super-hardcore when it comes to prepping!

Check it out when you get a chance, and remember that Dr. Prepper is on the air every Friday evening!

We often think about “being prepared” as simply bugging out, bugging in, or perhaps total collapse of society.  But the reality is that prepping – and I’m talking real preparedness here – is not an event, but instead it’s a lifestyle. It’s an attitude.

And perhaps the one place many of us fail at is in preparing while we’re on the move, in particular, while in our vehicles.  I received the following from eReplacementParts and have to say that, even though it’s not a source I’d normally think to read, it is definitely worth sharing! 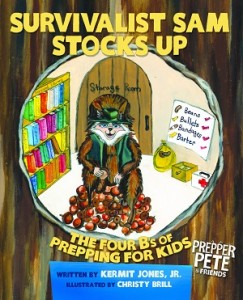 Prepper Pete & Friends are pleased to announce the release of the latest book in the series: Survivalist Sam Stocks Up: The Four B’s of Prepping for Kids!

Beans, Bullets, Bandages, and Barter Items are the staples of any preparedness plan. Join Prepper Pete’s best friend, Survivalist Sam, as he explores the Four B’s of prepping and many of the fun things your family can do, too!

Children will love this fabulously illustrated book that shows them, in a fun and non-threatening way, how to be ready for the unknown.  The topic of stocking up doesn’t have to be reserved for prepping and survival! Many activities, from gardening and canning, to first aid and reading, can engage kids of all ages to learn useful skills that will prepare them for the rest of their life. The Four B’s are important in many situations, though sometimes in a different order. Talk to your kids about safe shelter in a storm, or being aware of strangers; take a first aid class with them to learn new skills. Encourage reading and critical thinking. Don’t scare… prepare!

Purchase your copy in Paperback or for Kindle today!  And if you really want to help us spread the word, please leave a review on Amazon when you can!

Remember that “Some people prepare because they are afraid. Our family does not have to be afraid… because we are prepared!” -Prepper Pete

*No Kindle? No Problem! Simply download the Kindle Reading app for your favorite mobile device!

CHESAPEAKE, Virginia – (September 18, 2014) – According to the National Rifle Association, there are 300 million guns owned in America, and that number continues to climb by around 10 million each year. As a result, gun safety, especially where children are concerned, has become more important than ever. A new book series aimed at helping kids to be prepared for various situations has made a course change and its focus is on helping raise more awareness regarding children and gun safety. The book, titled “Prepper Pete’s Gun of a Son,” walks kids through gun safety, one page at a time.

“Everyone knows that guns and children can be a dangerous mix,” explains Kermit Jones, Jr., the author of the book. “But the absolute best way to tackle this issue is to prepare children by educating them, not scaring them. Teach them about proper gun safety and you will have greatly reduced the risks associated with them coming in contact with one.”

The book is the third in a series starring “Prepper Pete” who is an ant and survivalist. Curious and engaged, he explores and takes on issues that could be threatening, yet wisely prepares for them. In “Prepper Pete’s Gun of a Son,” he buys a gun for his young son and they set out to learn a variety of important safety skills, such as holding and shooting correctly, what to do if you find a gun, how guns should be safely stored, about never pointing it at something you don’t intend to shoot, and more.

Jones has created the book as an entertaining tool that can be used to help elementary-aged children learn more about gun safety. While it’s the starting point of an important discussion, he is clear that it is not a replacement for attending a gun safety course. Focusing on the idea that “knowledge is safety,” the book helps children become more aware of what to do if they are around a gun in order to prevent accidents.

“When you teach children about gun safety and proper handling, you remove much of the enticement that comes with it being forbidden fruit,” added Jones. “If we truly want to prevent injuries and help children be safe, we have to approach the topic like all other dangers.  We teach them about knives, matches, electricity, and more; in the same way, we need to teach them about gun safety.  The key is to teach safety, not fear. Education is the key here as it is with most other issues.”

Jones also has a personal reason to want to increase gun safety when it comes to children; he is a father to four young children under the age of 12. A 1998 graduate of the Naval Academy and former Surface Warfare Officer, he currently serves as a Chaplain in the Navy Reserves.

Additional books in the “Prepper Pete” series include such titles as “Prepper Pete Prepares,” with the next title, “Survivalist Sam Stocks Up,” due out later this month. “Prepper Pete’s Gun of a Son” is published by Kamel Press. The books are available for purchase at all major book retailers. For more information on the series, visit the site at: www.PrepperPeteAndFriends.com

Kamel Press is a Virginia-based book publisher. With list of books to their credit, they are also producing the “Prepper Pete” series, which helps children become more prepared about issues they may encounter. The latest book in the series is “Prepper Pete’s Gun of a Son,” aimed at helping children learn more about gun safety. For more information on Kamel Press, visit the website at: www.kamelpress.com 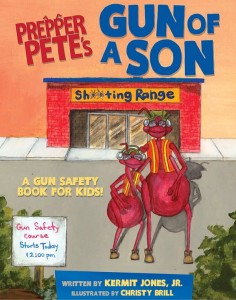 Kids and… guns? Absolutely!  Why? Because we should be teaching our children about safety – not trying to scare them!

If knowledge is power, then in the case of firearms, “knowledge is safety.” Familiarity with guns for kids often helps avoid the “forbidden fruit” syndrome, which can create a safer environment. When they are an appropriate age, work with your kids to familiarize them with firearms, and always stress the importance of gun safety!

“Teach Safety, Not Fear!” – that’s our motto when it comes to guns.  We teach them about other dangers – electricity, knives, matches/fire, etc… and that should be the same reasoning we teach them about guns… so they can be safe!

And let’s face it… your views may not matter when they visit a friend’s house, so teaching them proper safety will help keep them safe even when you’re not around.

IMPORTANT: Prepper Pete’s Gun of a Son is only intended to be used as a launching point of discussion with children. It is not intended to be a substitute for an actual firearms safety course. Seek out information and a local safety course in your area, and attend with your child to demonstrate to them the importance of gun safety.  Teach the “Gun Safety Rules” as well.

Kids should ask a grownup to help print and sign the “Gun Safety Contract” like the one Charlie and his dad, Prepper Pete, signed.

Birthdays, Christmas, Fourth of July!?  Grab a copy in Paperback (Amazon or B&N) or eBook (Kindle) (got a Nook or something else? Don’t worry… you can download the Kindle reading app).  Check other the other books in the series, as well!

“Gun of a Son” is approaching release! Christy just went though all the ants perfecting them this morning and is going to go back though all the guns.   We also made it through the “Big Editor” (Kari) who helped to smooth the order and really improved flow.

LIKE our page for a chance to win a free copy of our upcoming book, “Prepper Pete’s Gun of a Son: A Gun Safety Book for Kids” – we just need to get to 500 likes for Prepper Pete & Friends and we’ll draw TWO WINNERS! Share this post for an extra chance to win! (hint: the more you share, the more chances you get, so share it with each of your friends!).
Keep prepping!
P.S. Make sure you like the Facebook page and not just this post!

"My favorite part of the book was the importance of secrecy (OPSEC) about the family’s preps. That was very important to me and mine. I am constantly trying to drive that point home to the minions." - DiabloLoco at The Mental Militia
The fact is, I recommend this book to anyone who has young children... As a parent, after reading it through with your child, you can take specific pages and topics and discuss those with your child. - Todd of Prepper Website
"I found myself smiling as I read the book–the illustrations were certainly appropriate–and the message was a good one, discussing both reasons why you might be prepared and some good things to do to get better prepared." - Damian Brindle of RethinkSurvival.com